On 2002, my group climbed Mt. Banahaw & Mt. Tapulao in preparation for our supposed Mt. Pulag the following year. It never came to fruition! I entered government service December 2002 and majority of my friends made their girlfriends wife. Came 2011, After a Decade of Hiatus, I Returned to Backpacking with a new buddy, My Wife. After five (5) mountains this year, I saw an opportunity to fulfill that long-time dream of witnessing the grandeur of Mt. Pulag, by joining the annual PinoyMountaineer Charity Climb. Originally scheduled first week of October, the event was postponed due to storm forecast, a wise decision of organizer sir Gideon Lasco for it went true.

Me and my wife almost missed the climb. An extra-ordinary emergency at work forced me to answer the urgency first than meet the 11 pm departure schedule on November 18. Climb coordinator sir Carlo Nicolas exhausted efforts in contacting me, even when the bus left Victory Liner Pasay, thank God we were able to intercept the bus at the Magallanes bus stop in EDSA. The PinoyMountaineer crew could have forfeited our money, but they are Good Samaritan mountaineers.

Recommended itinerary for the Mt. Pulag (Ambangeg trail) is readily available at http://www.pinoymountaineer.com, I will just share some insights from a first-timer. First, I was forced to use the extra 10L of my 60L backpack just to bring viands (maybe my fault because I failed to attend the Pre-Climb). Well, an eatery before the DENR office serves as the breakfast area for climbers, just tell the driver to drop by “Pinkan Jo Eatery”. You may take-out lunch, even dinner which can save you space for packing and time cooking, food doesn’t easily become spoiled in cold environment. You can have your lunch at the Ranger Station before trekking for the base camp. Next, from what I’ve learned from sir Gideon’s friend Sir Martin Cortez, if you’re gonna buy a souvenir shirt, compare first the design and price of that at the DENR office and some stores at the Ranger Station, then decide where to buy after your descent.

The mandatory stop at the DENR office for registration and park rules orientation was very informative. Principles briefed there are not only applicable to Mt. Pulag but to all outdoors destinations. I now consider my fifteen minutes there an important part of my mountaineering.

After the final briefing of sir Carlo at the Ranger Station, sir Gideon led the prayer before our trek, I must say the most beautiful prayer I heard from a doctor. Our first stop along the trail was at Camp 1 where you can have the first view of the Mt. Pulag summit. 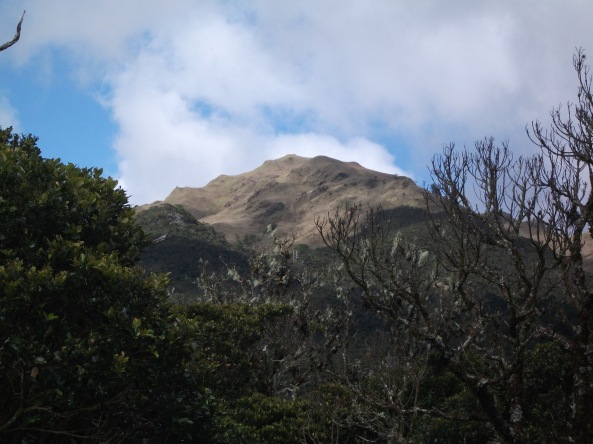 One great feature of Mt. Pulag is majority of its trail to base camp is forest that will let you forget the stressful traffic in the metropolis. 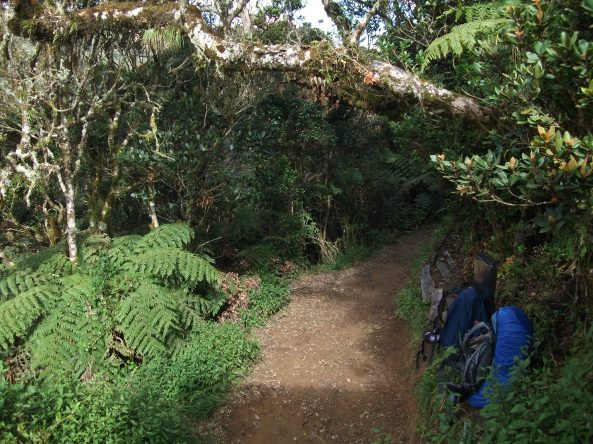 I told myself before that if I am going to do Mt. Pulag, (or if God permits and so do my pocket, Mt. Apo), I must bring at least one Filipino outdoor product, and as for this climb, an Apexus tent. 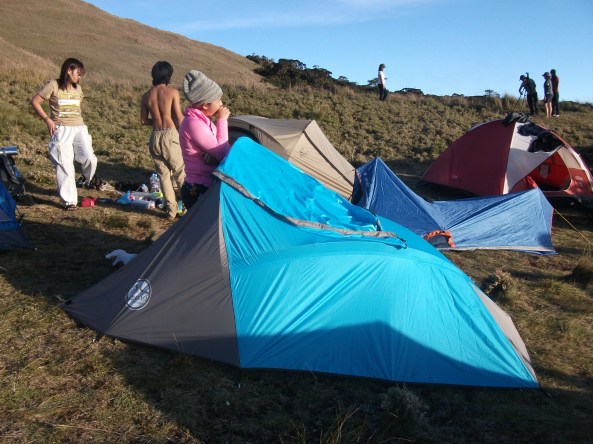 Even at the base camp, the views are a feast for the eyes. 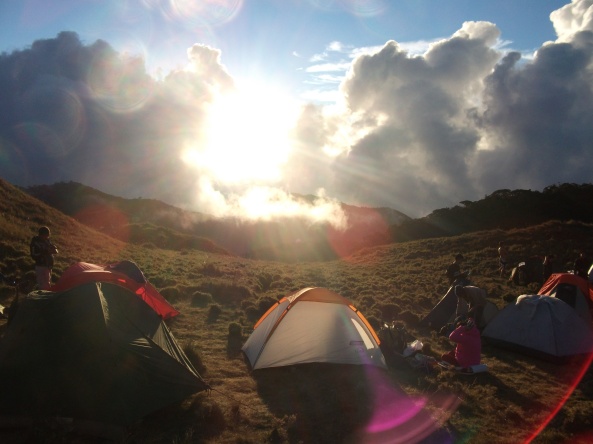 The following day, we started our summit ascent at 4 am, by the time we reached atop, our headlamps were still on.

I wanted to take an early picture of my wife but she refused to uncover her face, she was chilling real (according to sir Gideon, it was 8 deg C plus some cool winds).

My cheap digicam cannot take a good direct shot of the sun so I just panned somewhere else, this at the great mountains of the Cordilleras. 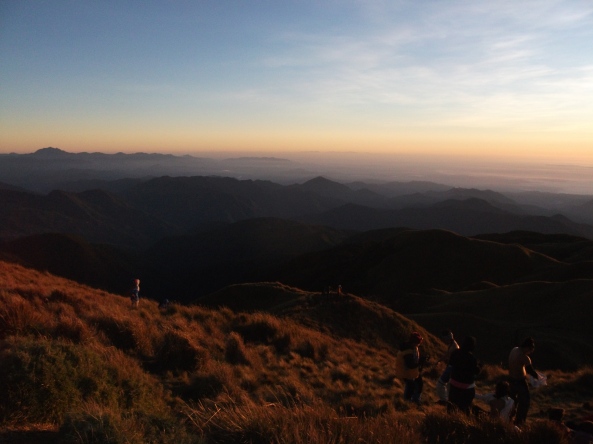 I never thought I will have a photo taken by Martin. I love this shot! 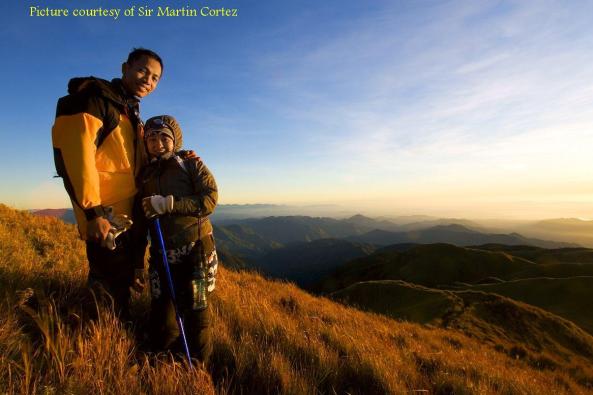 … and never thought that I will climb with today’s proponent of guide to hiking and mountain climbing in the Philippines, PinoyMountaineer himself, sir Gideon Lasco.

My camera doesn’t have zoom capabilities so I failed to snap that “sea of clouds” visible afar when we’re on the summit. Well, the following were still “sea of clouds” for me! (or maybe stream of clouds!)

I am always mesmerized by Martin’s Facebook profile picture of the “Lonely Tree” and thanks for the Charity Climb I saw it personally. 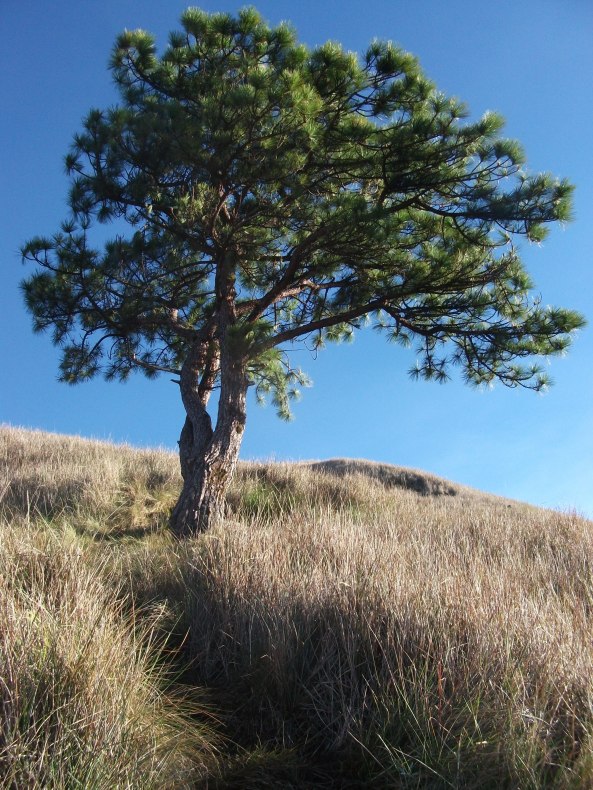 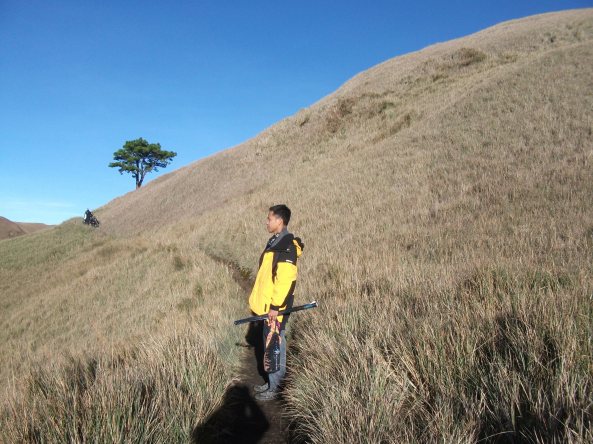 Below are some of my panoramic shot, click the picture to enlarge.

In the penultimate, let me discuss a little about the annual PinoyMountaineer Charity Climb. It started on 2009 held at Mt. Pulag for the medical supplies in Bokod, Benguet. The following year, beneficiaries were some Philippine General Hospital patients and a medical mission at Gregorio del Pilar, Ilocos Sur; the featured mountain was Tirad Pass/Peak. And for this year, held on two mountains, Mt. Ugo and Mt. Pulag, the Charity Climb aimed to raise funds for the health information website, Kalusugan.PH.

I can vouch that Kalusugan.PH is very informative, concise, and “maka-masa” very grass-roots! I hope the Department of Health give it sponsorship. Might become the best website in the country, and for information the site is in Tagalog. I feel proud to have contributed a little to this endeavour.

Please bear with my “not-so-good” videos.

~ According to sir Gideon, it was 8 deg C plus some cool winds.

~ Hope to come back and focus on the other side.

enter the world of wordpress

Simple family-man living normal life. I use my cheap camera to capture priceless moments, travels or everyday life. This serves as my online photo album which I can share to everyone. And I am proud of the Philippines and its people.